I’ve had a bit of writer’s block for the last couple of months. Lots of things happening at home that have kept me super busy, although I’ve got about six different blog posts on the go at the moment!

Last week I had highs and lows with Facebook’s ‘On This Day’ feature. What a fun and quirky way to remind yourself of what you were up to this time last year, right? My ‘On This Day’ feature is usually filled with photos of pine cones, rugby shirts and robins. Sometimes it flags up a presentation I did somewhere on baby loss.

Last week it told me it was a year since one of the single proudest moments of my life. This time last year, following a heart to heart with a dear friend of mine, I was privileged to meet her mum and give her an Our Angels memory box for her daughter Michelle, stillborn 42 years earlier. 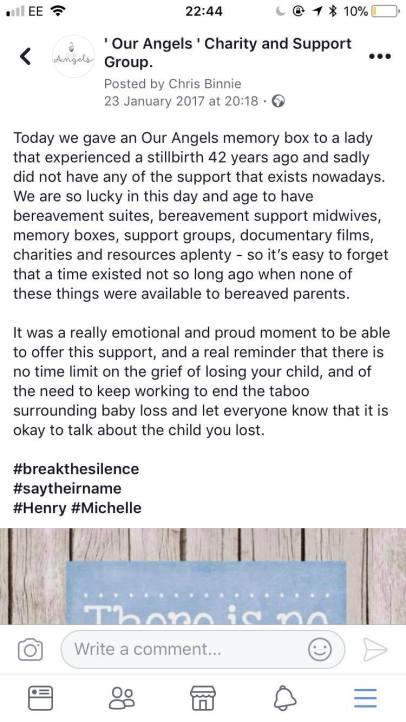 This really brings it home to me how lucky bereaved parents are in this day and age. That may sound a strange thing to say but it’s true.

Parents thirty, forty years ago got nothing.

Even in the last three and a half years, I’ve seen big changes in Harrogate and nationally – hugely important things available now that weren’t available when Henry died:

But why give a memory box to someone 42 years after their daughter died? Because it MATTERS. My great friend David Monteith (Grace’s dad – Grace was born the same night as Henry) and I did a radio interview and phone-in on BBC Radio Five Live breakfast during Baby Loss Awareness Week in October last year, and some people were calling in who’d lost decades previously. If you’ve got an hour and a half and a family-sized box of tissues, it’s worth a listen by clicking on the link. 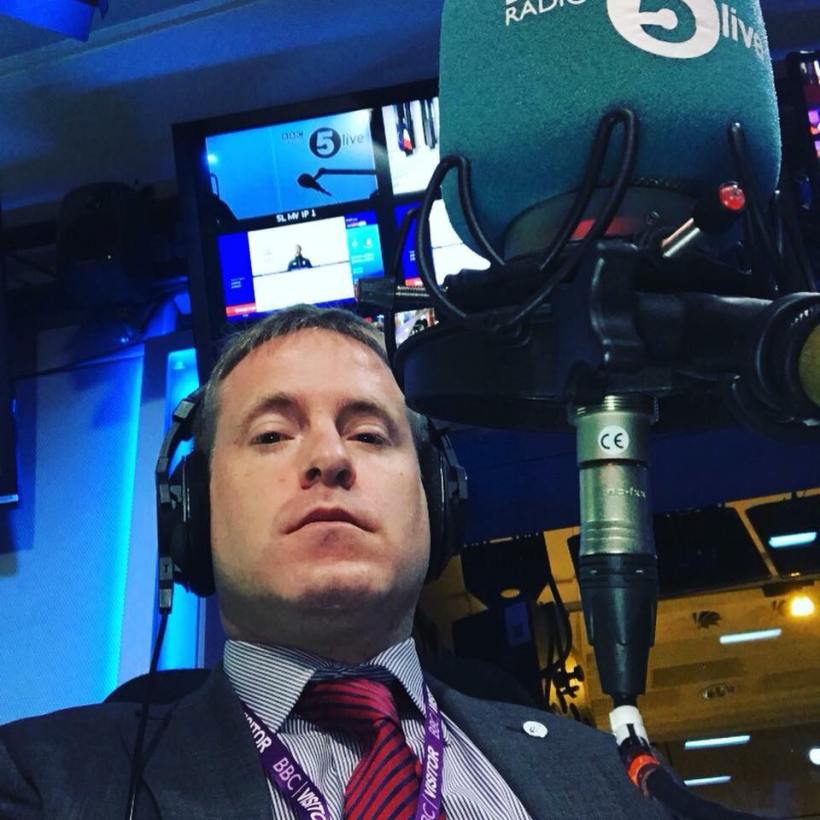 I sat in the studio listening to these callers and being invited to come back on things they said. I watched as the hugely professional and experienced presenter just barely held it together as these women (and men) talked about their babies, and it struck me – this was perhaps the first time they had EVER talked about their babies outside their immediate family circle.

I could literally hear the weight of decades of buried grief lifting off their shoulders as they talked, because for the first time someone offered them the opportunity to talk about their babies and say THEY WERE REAL.

So that’s why it’s so important for these parents – even the ones that lost many years ago – to have the chance to contribute to phone-ins and receive memory boxes. Because none of these things in isolation will change the world – but they WILL change the world for that person. The lady who called in to that phone-in 32 years after her child died will have been emotionally exhausted for the rest of that day – but she’ll most likely have slept more soundly than she has in decades that night. My friend’s mum receiving a memory box will have made a huge difference to her, even four decades on.

So anyway, back to Facebook’s On This Day feature…this post came through and just reaffirmed to me why I and so many other bereaved parents all over the country spend so much time doing what we do – because it MATTERS.

That was 23rd January 2017. On 24th January 2017, I was at St. Mary’s Hospital in Manchester speaking at a pilot centre evaluation day for NHS England’s Saving Babies Lives Care Bundle, hopefully inspiring these professionals to keep going out and striving to reduce stillbirth rates – because the image above applies here too. Sure, reducing a national rate is vital, but that rate is made up of lots of individuals, and each of those babies is a life in its own right, not just a statistic.

Then, after these couple of days of On This Day positive affirmations, BAM. It hit me like a freight train. The thing is, I knew it was coming at some point around now.

I couldn’t remember which day. But I knew it was coming. The period of time every year between late January and late April is like one big online Sliding Doors parallel universe for me each year. It’s the period when I get reminded every year what it felt like to be truly innocent and happy. I nearly wrote ‘ignorant’ but that’s too strong. I just didn’t know what it truly felt like to be hurt. When your baby dies, you learn how it feels to be sad even when you’re happy.

Because 25 January 2014 was the day we announced to the world that Henry was on his way. So every year from late January to late April, Facebook gives me a window into that blissfully unaware period we had where we were simply excited because we were going to become parents – scratch that, because we WERE parents. 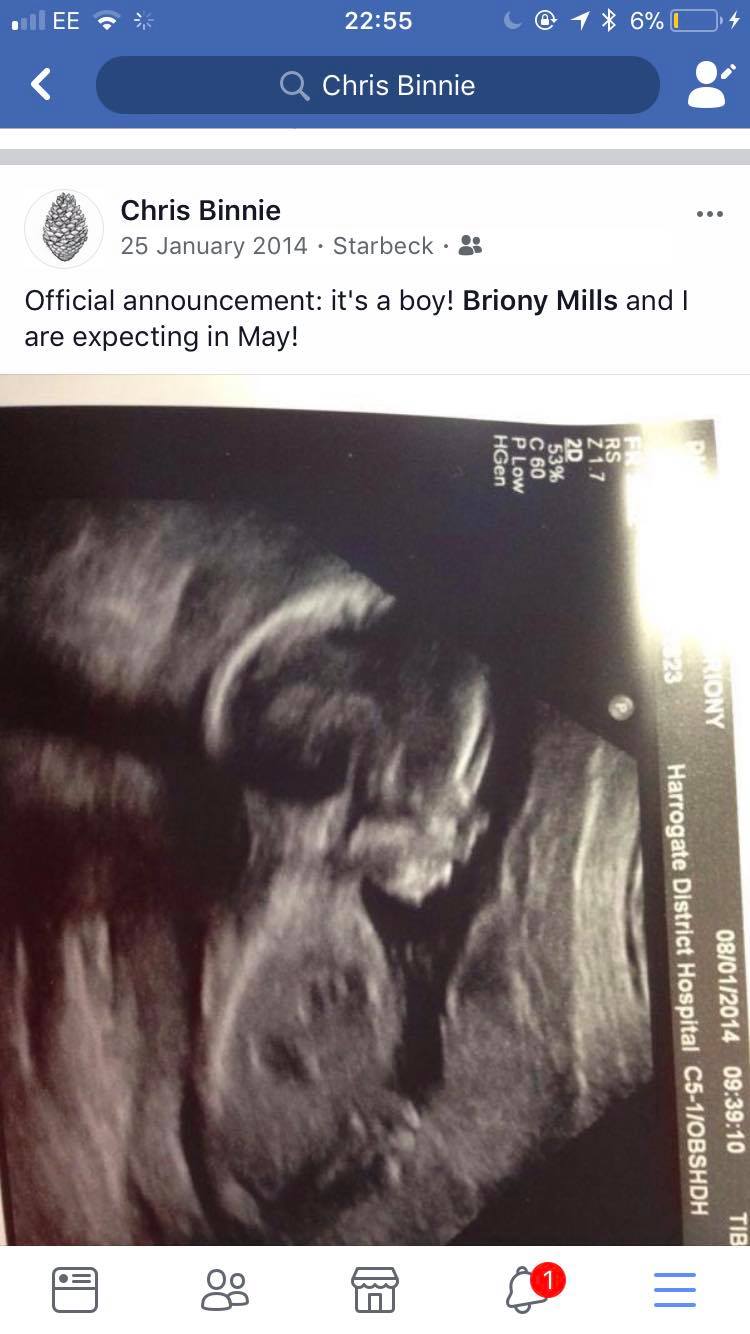 Someone even commented “well done on having a scan that actually resembles a baby”. Even at 20 weeks, Henry was perfect.

And so now I brace myself, because for the next three months, I’m going to get regular Sliding Doors looks back into life when a pair of first time parents who simply have no fucking clue what to do or what to buy just concentrate on buying fun stuff.

2018 Chris: “I was so happy with that purchase. It’s still in the packaging on the shelf in our front bedroom.” 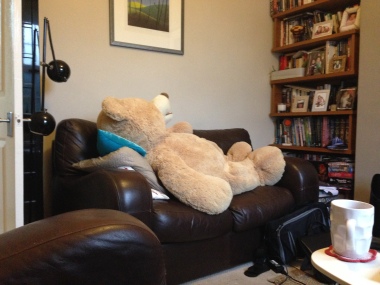 And that’s okay. Because it’s all part of the journey. And this most difficult journey fundamentally changes you as a person. Henry’s made me a better person. He didn’t even take a breath and I don’t know what colour his eyes were, but he’s made me a better person. Because he’s taught me what it means to truly love, unconditionally and infinitely. And you start again. 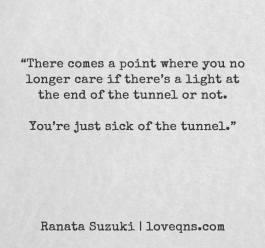 What I’ve learnt more than anything is that actually, so many things that I used to think were vital just aren’t. You get a totally different perspective on life, and what becomes important is looking after people and looking out for people. That’s IT. Everything else just supplements that. 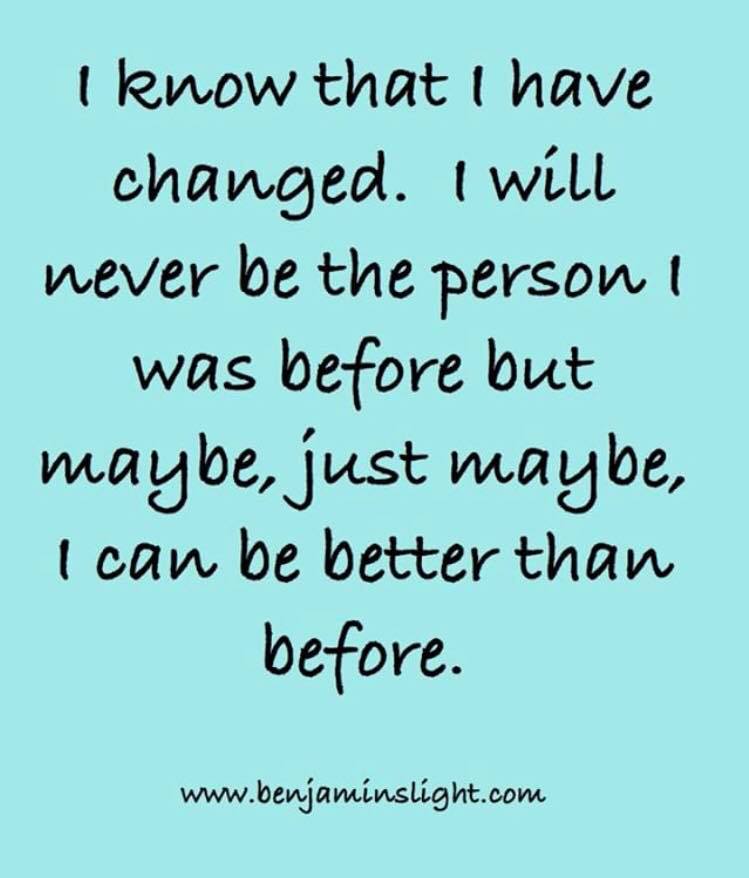 The naïve innocent parts of our journey and the devastating parts of our journey are BOTH part of that. And that’s okay. So it can certainly leave a lump in the throat seeing these things that were going on in your world of excitement before your heart broke into a million pieces. But it also brings just a hint of a smile, perhaps a brief moment of reflection on what might have been.

But they’re all just different parts of the same journey. The combination has made us who we are. Henry has made us who we are. So many parents everywhere talk about their babies, because they desperately want to keep their memory alive – but also because our babies have totally, irrevocably, changed us. As my friend Laura says in her amazing blog After Arthur, “the loss is great, but the love is greater”.

Sometimes, I love On This Day. Often, it reaffirms why I do what I do, what my purpose is – because life isn’t about what we’re doing, it’s about why we’re doing it.

But sometimes, just sometimes, I wish On This Day wouldn’t just jump out on me when I’m not ready for it. Because, proud though I am of Henry and what he and I have achieved since his birth, I just want him here.

2 thoughts on “Timehop often makes me smile. But it can still do one…”

Henry's dad, finding ways to navigate our 'new normal' and create a legacy for our son by helping others who face the loss of their child and educating professionals. 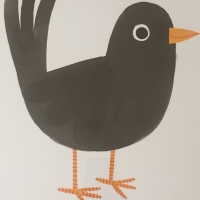 This is how I let a most unforunate loss affect me, but not negatively. I made a choice to pay attention to the signs and understand why they were there. This is my perspective of a series of ironic events that changed me, and gave me knowledge.

A Heart Full of Henry

My story as the father of a life that ended before it truly began.

Journey to become a strongwoman

Learning to find joy without Edith; life after baby loss

Walking in the Valley of the Shadow of Death, A Mother's Journey of Child Loss

Daddy To A Rainbow & A Star